An Unjust, Brutal, and Unprovoked War

Now in its fourth month, Russia’s unprovoked invasion of Ukraine has claimed the lives of thousands of Ukrainian soldiers and, according to the Office of the UN High Commissioner for Human Rights, more than 3,500 Ukrainian civilians. Thousands of Russian families are also mourning their lost sons. 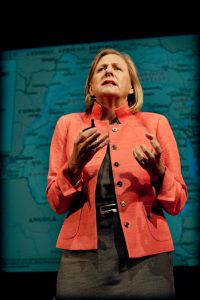 Foreign policy experts like Ambassador Nancy Soderberg, the National Democratic Institute’s Senior Resident Director for Kosovo, attribute Russia’s aggression to President Vladimir Putin’s desire to reverse what he considers to be one of the biggest catastrophes in modern history – the collapse of the Soviet Union.

“The invasion of Ukraine should be a wake-up call that Putin is trying to undermine democracy and U.S. interests everywhere. So, we need to make sure that we have a very strong effort to strengthen democracy and the delivery of democracy across Europe,” says Ambassador Soderberg, who served as Deputy Assistant to the President for National Security Affairs, the third-ranking official on the National Security Council, during the Clinton Administration.

Also appointed in 1997 as an Alternate Representative to the United Nations, with the rank of Ambassador, Soderberg shared with TEDxJacksonville her perspectives on what has been described as the largest conventional military attack since World War II and the international community’s response to it.

Among the themes from her 2013 TEDx talk – A New Global Compact that are especially relevant in the midst of this crisis is that solving the world’s challenges is essential to our national security and prosperity.

What were Putin’s aims in invading Ukraine?

Part of Putin’s goal is to rebuild the former Soviet Union or even the former Czarist Russia with him as the glorified leader of a reconstituted Russia. That’s why he’s taken Abkhazia and South Ossetia in neighboring Georgia. That’s why he took Crimea in 2014. He thought he could create this narrative that he was defending Russians against supposed Nazis in Ukraine and, therefore, have a glorious, quick and easy victory to continue the march of this narrative. But it’s all a fiction. Ukrainian Nazis have not threatened its Russian population. There are no Nazis in Ukraine. The leader is Jewish, in fact, and so this fiction just didn’t work.

Putin thought it would be an easy cakewalk all the way to Kyiv but has met with extraordinary resistance and a unified West that is arming the Ukrainians to the point where they’ve been able to retake Kyiv.

Putin has repeatedly expressed that he considers NATO’s expansion eastward incorporating Poland, Romania and the former Soviet republics of Lithuania, Latvia, and Estonia, as well as the prospect of Ukrainian membership a major threat. Was there any indication that Ukraine was inching toward that?

Back in the 90s, there was a lot of discussion on whether Ukraine should join NATO, and it was decided that they wouldn’t exclude it down the road. Honestly, some NATO members pushed for that in deference to Putin, thinking it would be a step too far and trigger too harsh a reaction from him. So, Ukraine was not put on a fast track. Putin fabricated any justification for this war. There was nothing that was moving Ukraine to the front of the line on NATO in 2022.

There are a lot of revisionists in foreign policy saying we shouldn’t have expanded NATO, that all that was a mistake and a provocation to Russia. Imagine had we not done that, Putin wouldn’t have stopped at the Polish border. I think we made the right decision in expanding NATO as far as we did. Had we expanded NATO to Georgia and Ukraine, would the Russians have lashed out more than they’re doing now? You know that’s a question that will be debated for decades.

I think those who question whether it was smart to expand NATO like we did are shortsighted. The countries that are part of NATO are thankful for it. Kosovo very much wants to join NATO. Finland and Sweden also want to join NATO. That’s a good indication that countries think being part of NATO is a good security blanket.

To what do you attribute the level of sanctions being imposed by the international community?

The shocking and appalling reality of what Putin is doing. It’s so egregious in the way he’s targeting the civilian population. This is a completely unprovoked war. So why is he even doing this? President Biden and Congress deserve credit for marshaling the resources, doing the diplomacy, and laying the foundation for these sanctions. It’s truly extraordinary. I think it’s going to change the nature of how we do sanctions, as well.

Are the sanctions working?

We won’t know until all this is over. I think the West has been strong in punishing Putin and his inner circle, and they’re certainly having an impact. Have they stopped the war? No. Have they caused his inner circle to defect? Not yet. Is it undermining his narrative that this is going to be a quick, easy war? Yes. The people in Russia are going to begin to notice when the oil revenue and the money dry up. So, we may see more significant defections.

Those around Putin are going to get tired of having their lavish lifestyles curtailed. So, the hope is that the pressure around him will be enough to make him decide to declare victory whatever that means and get out of Ukraine. He is still trying to take the Donbass region. He’s threatening Moldova. But this is not over yet, and how it evolves and resolves itself is very unclear. But there is no way Putin emerges stronger.

Is there a scenario where Russia backs down?

They already have backed down. They thought they were going to march into Kyiv. They’ve given that up. Now they’re trying to take the Donbass region. And if the Russians can’t hold that area, they’re going to have to leave, and that’s our goal. Then the question is, should they get out of Crimea and the two parts of Georgia they control? This is a bigger issue than just the Donbass region. But I think that’s the open question right now. Can they hold part of the Donbass region, declare victory, and get out? Or are they defeated in a very bloody, costly war? There have been probably tens of thousands of Russian soldiers who’ve already been killed. And as those casualties mount up, there is going to be a cost to those around Putin of continuing to sell this fiction that this is a glorious, just war. It’s an unjust, brutal, unprovoked war.

How are we going to continue to address the major humanitarian crisis the war has unleashed, with millions of Ukrainian refugees having fled and continuing to flee the country?

We’re going to have to have a massive Marshall Plan to rebuild Ukraine. The world is responding to the immediate humanitarian crisis fairly quickly in terms of helping the Poles cope with the massive refugees trying to find a humanitarian corridor. The part that is beyond our control is the indiscriminate bombing of civilian areas, buildings, schools, hospitals — the human tragedy. Ukrainian lives are going to continue to be lost until this war ends because the Russians are making no effort whatsoever to avoid killing civilians.

There’s also the question of whether Ukraine, which is the breadbasket of the world, can even feed its own population? And if it’s going to miss an entire agricultural season, the international community is going to have to assist in feeding the Ukrainian people. I think we’ve got the capacity to do that. The outpouring of support to those who’re willing to take in Ukrainians as refugees is extraordinary. So, on the humanitarian side, it’s going to take a major effort, and I think the world will step up to that.

In addition to the war in Ukraine, what other global issues should we be concerned about?

On the nuclear non-proliferation front, we still don’t have agreement with Iran. Iran may get them if we don’t come to a deal. North Korea has nuclear weapons.

You’ve still got the global pandemic that is by no means over, and it’s devastating the developing world. Even in the U.S., we have the highest death rate of the entire world — we just passed the grim milestone of one million killed. And, until everyone is vaccinated, the variants are going to keep developing and you’re going to continue to see spikes in the coming years.

We may be facing a recession with the war in Ukraine and the rising inflation. The world economy is quite unstable right now, although I think it is fundamentally sound.

We’ve got a major challenge with China, which is becoming a global power. It’s dramatically increasing its military capacity. Its Belt and Road Initiative has put tentacles into the entire world to gather up resources to feed its growth. I think it’s a question of are we going to remain in an economic competition with China or enter a conflict that becomes another Cold War and even, in some cases, a hot war.

China is poised to threaten Taiwan the way it did Hong Kong. We have a defense obligation to Taiwan. So, what do we do? How do we handle that? I think China’s watching what we’re doing in Ukraine very carefully. And would we take a similar stance with any kind of military action against Taiwan? That’s an open question. I don’t think the U.S. has that answer yet. But I think it’s causing pause on China’s plans to take over Taiwan.

And then there’s the global income inequality. The eight richest men, and they’re all men, hold more wealth than the bottom four billion people. That’s just wrong, and, with the Internet, people know how the other half lives.

People want to believe that they can give their children a better life, and increasingly — we’re seeing this in the U.S. as well —they’re not able to do that. That makes them susceptible to narratives of blaming others, and, therefore, you get radical extremes on the left and the right. And that’s the major challenge of our time. You can’t see it, you can’t feel it, but you can look at the statistics and see that the income inequality is dramatically increasing, and that has to be addressed.

Several local charitable organizations have set up relief funds to help those in Ukraine, as well as support Ukrainian refugees looking to resettle in Jacksonville. If you wish to make a donation to aid this work, you can do so at JaxCathedral.org or Catholic Charities Jacksonville.