I have watched the all-volunteer TEDxJacksonville team work on the “Fear Less” conference for the last 10 months. From our annual retreat out on Big Talbot Island last January, where we chose this year’s conference theme, to this past weekend at the Florida Theatre, when all the planning finally came to fruition, it’s been quite a ride. The “Fear Less” theme grew out of our desire to create positive change in Jacksonville. We believe that to live fully — to risk boldly and embrace new challenges — requires that we learn to face fear and be free of it. Fear of failure, fear of the unknown, fear of ourselves or the opinions of others — what might we accomplish (especially as a city) if we focused on what motivates us into action, not what prevents us? Fear Less Opener – TEDxJacksonville from Get Em’ Tiger on Vimeo. When we posted the speaker application in March, we had over 100 applicants. Our speaker team eagerly pored over the applications. We’ve learned that women are statistically less likely to apply for a speaking slot at TEDxJacksonville events. Showing diversity in gender, sexual orientation, age, ethnicity, and opinion is a cultural value to our team. After a long process, we selected 12 phenomenal speakers, each with a different definition of “Fear Less,” and then grouped their Talks into three subcategories: Engage, Inspire, and Enlighten — all actions that we view as having the power to dispel Fear. In the months leading up to the conference, we put our speakers through a lot. They had multiple one-on-one sessions with their speaker coaches, met with our team photographer to have their photos taken (which were then edited and formatted by our designer and posted online by the web team), got sent out for innumerable media appearances by our communications team, and then had to take part in a final run-through the night before the conference. None of this could have taken place without our founder Doug Coleman and our co-organizer Sabeen Perwaiz Syed keeping a firm rein on everything. Then, on the day of the conference, we put each speaker on perhaps the biggest stage they will ever have and invited them to give the Talk of their lives. Our 2016 speakers really are fearless because none of this seemed to faze them in the least. Each speaker was inspiring, insightful and amazing!

Engage The Engage portion brought us speakers Tracy Alloway, Donna Orender, Cornelia Dinca, and Rick Baker. These speakers utilized unexpected tools — Instagram feeds, sports balls, a bike, a post office, and quite memorably, an elephant — to illustrate the power of connectedness. Tracy Alloway documented how social media can improve working memory and build empathy. Donna Orender showed how taking risks — such as being brave enough to ask, “Can I be the only girl on the tennis team?” — can have outcomes that are good not only for you, but also for future generations of female athletes. Sometimes, she noted, all it takes is a “Hell Yes.” Cornelia Dinca spoke about the need to be brave enough to re-evaluate our past decisions and priorities, such as valuing cars over people in the development of our cities. Documenting how Amsterdam has transformed its streets into a people-centric paradise, Dinca said any city can do the same, but it starts with people demanding change. Rick Baker, the former mayor of St. Petersburg, defined a Seamless City as one where there is no “bad” area,” no place where “you reach to lock your car door,” but creating a Seamless City requires not “overlooking” any section. In hearing the Engage speakers, I realized fear, even if it is just turning the other way to avoid conflict, can make you miss big opportunities.

At the end of the first session, we headed outside for a delicious lunch catered by Biscottis, Cowford Chophouse, Super Food & Brew, and The Candy Apple Cafe & Cocktails. Working such breaks into the conference day is imperative because taking in so much “brain food” at once can be exhausting even for the most ardent intellectual explorer. Our conference program is designed as a blend of Talks, performances, engagement activities, and breaks. Every detail of the day, from the quality and diversity of the food vendors we select, to the swag bags and venue signage, are discussed and analyzed in our team meetings. Our Engagement Team works to ensure all attendees, extroverts, and introverts alike, have opportunities to interact with speakers, performers, and the TEDxJacksonville team. Throughout the conference, our team tries to encourage our attendees to sit by strangers and engage with one another. That can be a source of fear for some, so we create moments to ask a stranger questions like, “What’s your relationship like with your mother?” Or “When is the last time you cried?” We cultivate engagement pieces such as these from reading studies about questions that bring people together.  We researched other conferences that utilized platforms like TINT and Gifn and even social media bingo, poems and fortune cookie compliments, not to grow our platform, BUT TO HELP SPREAD IDEAS.

Inspire   After lunch, the second session, Inspire, began. Jeanine Hoff spoke fearlessly of her own experience with depression, of her stay in a psych ward and the people she met there — not crazed, out-of-control loonies like in the movies, but real people, just like you and me. Someone’s kid, mom, or brother. Now she builds community support for those who struggle with mental health disorders. JeffriAnne Wilder described the “outsider-within” status that black women in higher education commonly feel, and spoke about the need for all of us to activate the power of self-definition. Sheena Koshy, who became a U.S. citizen in May and is excited that she has the honor of voting in the upcoming election, described how obtaining legal citizenship is no easy process (and that is coming from a self-admitted educated woman of means). Sheena took a (COMPLEX) subject such as visas and made it understandable, and at the end inspired us to look at the immigrant experience in a different light. Mark Tumeo spoke on the politics of fear, and showed how the effectiveness of a “fear appeal” is heightened in times of great change. I had the privilege of enjoying pizza with Mark the night before the conference. Mark has an EXTREMELY impressive, successful, intimidating, and diverse background. I was literally in awe of his accomplishments, but also astonished to hear he has family members that are afraid of the fact he is gay. Mark’s talk reminded us that the effectiveness of fear is diminished by knowledge, and that informed discourse is a prerequisite for the development of sound policies. Some people don’t realize that the E in TED stands for entertainment; our conferences always feature musical and artistic performances in addition to the Talks. Our remarkable performers this year included Tomboi a talented, queer indie Jacksonville band, Odd?Rod, a spoken word artist that brought me and those surrounding me to tears, and The Chris Thomas Band (whose music sounds like James Brown and Bruno Mars had a baby). In a surprise appearance, the incredibly talented young students of “Don’t Miss A Beat” delivered two powerful performances that reminded us children have so much to teach us about being fearless. “Don’t Miss A Beat” blends music, art, academic achievement, and civic engagement to inspire and enlighten children and teens in the Riverside and Brooklyn communities.

Students and their education are so important to the TEDxJacksonville team. This year over 100 students (out of 750 people) attended “Fear Less.” We are thankful to the following organizations for partnering with us to identify kids from their programs, and invite them to attend: I Am A Star Foundation, Youth Leadership Jacksonville, Pace Center for Girls Jacksonville, GenWow, Delores Barr Weaver Policy Center, City of Jacksonville System of Care, Girl Scouts of Gateway Council, and Robert E Lee High School Leadership Class. Several students (who paid for their discounted tickets) thanked us for the “wonderful experience” and for making it possible for them to attend.

Enlighten Our final session was Enlighten. The goal of this session was to illustrate how fear is often overcome by giving someone greater knowledge and understanding about a subject, situation, or idea. Gay Culverhouse, former president of the Tampa Bay Buccaneers and an internationally recognized expert on concussions, used her own experiences to demonstrate how helmets don’t work against brain injury and never will. Gary Chartrand urged us to promote STEMM programs in schools to fill the demand for computer science-based jobs in the states. Seventeen-year-old Amber Yang (who discovered how to predict the impact of space debris via computer science) enlightened us on supporting one another and leaning into one another instead of falling into the trap of “stereotypes” such as what a scientist “looks” like. It was such a powerful message that one female student, her eyes full of tears, ran up to Yang after her talk and thanked her for “reminding me that I can do anything.” She told Yang that her talk had literally changed her life — already, we see the power of ideas worth sharing!

Our speakers and performers commanded Stage X and delivered performances we’ll remember forever. Thanks to all of our attendees and supporters who continue to inspire us. #TEDxJAX #FearLessJax A photo posted by TEDxJacksonville (@tedxjacksonville) on Oct 23, 2016 at 1:45pm PDT

Those of you that know Barbara Colaciello know that she embodies self-esteem and fearlessness. She gave a wonderful Talk on the power of Improvisation at TEDxJacksonville 2013, so I asked her for her take on being “Fear Less” as a speaker. She said, “The thing to remember is — as a speaker, it’s not about you at an event. You are a part of a team that makes the day. So it’s everyone together. It’s about sharing the ideas and putting yourself and your ego aside.” After the final session concluded, we retreated to the street outside the theater for the PNC AfterGlow party to enjoy great food and to keep the conversations going. It was a blast! (And not just because of the huge boombox truck that partner John Phillips had parked outside the Florida Theatre to provide music.) The party also gave us an opportunity to thank the partners that supported TEDxJacksonville and gave our speakers this platform to present ideas worth sharing.

The #boombox providing the soundtrack to the @TEDxJAX after party. Great job to the presenters and organizers. #FearLessJax #TEDxJAX pic.twitter.com/2tBtTUyyjx — John M. Phillips (@JohnPhillips) October 22, 2016

So what’s next? The Talks from “Fear Less” will be post produced and uploaded on our YouTube channel shortly—the process will take between four and six weeks. As soon as the links are available, we’ll post them. Please share them across your social networks and encourage your friends to do the same. The power of TED and TEDx Talks is that a single idea, if given oxygen and a spotlight, has the power to ripple across the planet. But that won’t happen unless we make sharing these ideas a priority. In the meantime, we at the TEDxJacksonville team want to encourage you to reach beyond your bubble. Be audacious. Fail forward. Let urgency conquer apprehension. Reject fearful and be fearless. Thank you for trusting TEDxJacksonville to lead this conversation. TEDxJacksonville is a 100% volunteer-based organization. 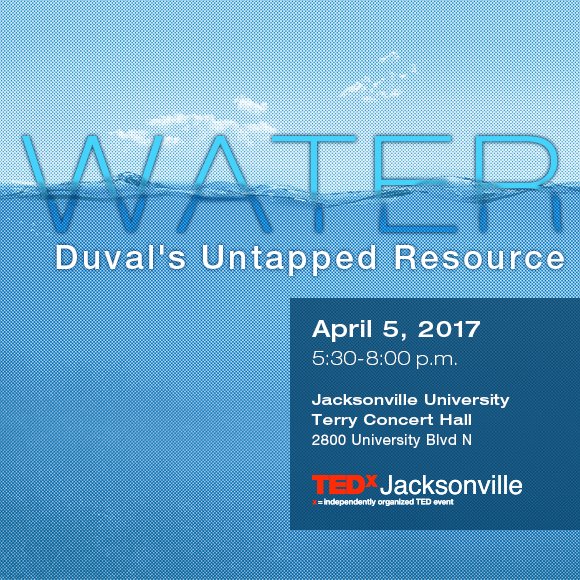