“We hold these truths to be self-evident, that all men are created equal . . ..” But do we really believe that? Phillips submits that the hypocrisy uttered in this line has not changed much since 1776. Not when slavery was abolished in 1865. Not when women were allowed to vote in 1920. Not when the black vote became protected in 1965. Still not when some 30 states passed laws giving their citizens the inalienable right to kill based on subjective fear, a law known as Stand Your Ground. The scales of justice remain unbalanced because government cannot legislate a path to something that must come from the heart. Equality can’t be reprogrammed. It can’t be rebooted. It must be nurtured. It must be fostered. John Phillips attended the University of Alabama for college and law school, and shortly after moved to Jacksonville in 2001, which has become home to not only his own law firm, but also his wife Angela and two children – Bennett (age 3) and Weston (age 1). Phillips is licensed to practice law in Florida, Georgia and Alabama and is the youngest in northeast Florida to be both Board Certified in Civil Trial law and have obtained the highest rating available of AV Preeminent by Martindale, which has been rating lawyers since the 1800s. John also has been recognized as one of the best lawyers in Jacksonville by readers of Folio Weekly, Void Magazine, and as the “Face of Justice” by Jacksonville Magazine, and has received many national awards and recognitions. He is most known for his association with the Michael Dunn/Jordan Davis case, where he represented the family of Jordan Davis who was shot and killed in November 2012, but Phillips has represented victims in several high-profile cases and has been featured on CNN, HLN and most other national networks. We touched base with  John Phillips  to have a conversation about what’s been going on since his TEDxJacksonville Talk

1. How did the idea for your TEDxJacksonville talk get started?

“Tough question. Mine was a personal journey of one guy’s evolution. Some might say my talk got started in grade school when a segregated emphasis was placed on black history or living a life which was unintentionally moderately segregated. I could also say the talk didn’t start until Jordan Davis was killed. I might even honestly profess it took walking in Jordan’s skin and seeing the clear inequality of benefit of the doubt between white and black. The birth of my own child also spawned something. The point would be we are all beings who are a change in perspective from being moved to action.”

2. What updates or progress have you seen since your talk?

“I have been asked to give a few more speeches and actually used my TEDx experience to further my training as a public speaker. Related to my topic, Mayor Curry appointed me to Jacksonville’s Human Rights Commission, which began in March. We have also been selected to represent more families, which were victims of violence. It’s not something we would consider progress, as we’d rather the progress be in the form of change.”

3. What are recommended resources related to your talk (books, websites, etc.)?

“We have a volume of resources about Jordan Davis located at JusticeforJordan and there are two documentaries out about his story. One is called Three and a Half Minutes and it is currently on HBO. Armor of Light features me and my family and a little more about our journey. It debuted at Tribeca, and aired on PBS.”

4. How can people take action on your idea (volunteering, sharing the message, etc.)?

“Jacksonville has a violence problem and an “us” versus “them” approach to community. They are related. We can’t be closed minded to the fact that we all can make a difference, we can all look for little ways to help Jacksonville become a better place. No matter our race, economic status, career or a host of other defining categories, we need to realize that we will only heal if we heal together.”

4. Who is your mentor, or who inspires you?

“My mother was my ultimate mentor. She was the kindest, warmest person I have ever known. I lost her in November of 2011, only to find her again guiding me more than she ever had before.”

5. What is your favorite TED or TEDx talk (aside from yours)?

“Locally, Mark McCombs is still one that I watch and find amazing. He is a difference maker. I have since joined him at a STEM event and just can’t say enough positive things about it.”

6. What invention/idea do you hope will come to life within the next 10 years?

“Idea? I hope we can reverse the idea that fear sells and is the greatest motivator of people. We will perish. As Abraham Lincoln said, “America will never be destroyed from the outside. If we falter and lose our freedoms, it will be because we destroyed ourselves.” We are destroying ourselves by letting those who want money, power and control to use fear to gain it.” Thank you for trusting TEDxJacksonville to lead this conversation.TEDxJacksonville is a 100% volunteer based organization. 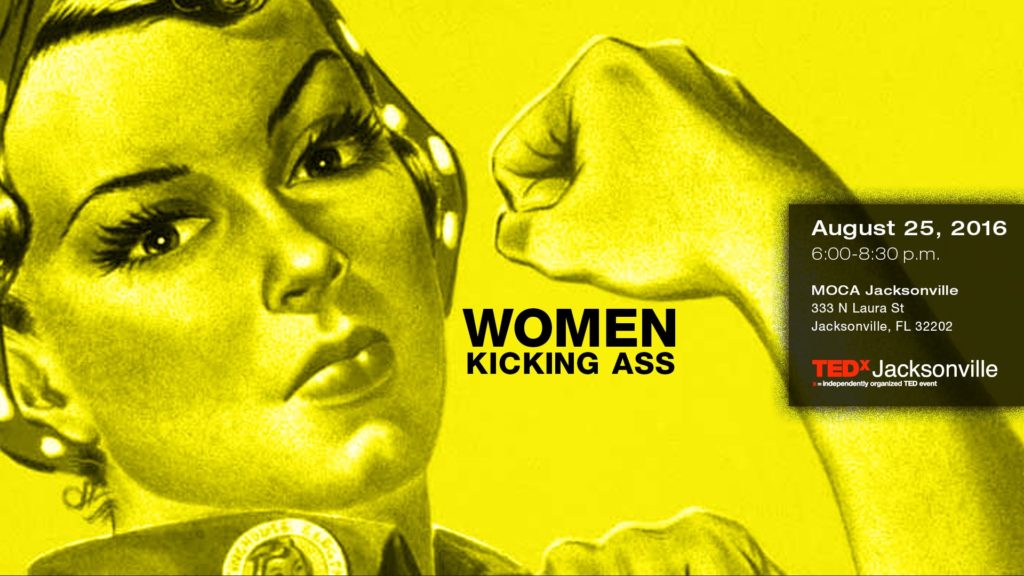