Recap for Hidden No More: The Immigrants Within Our Community 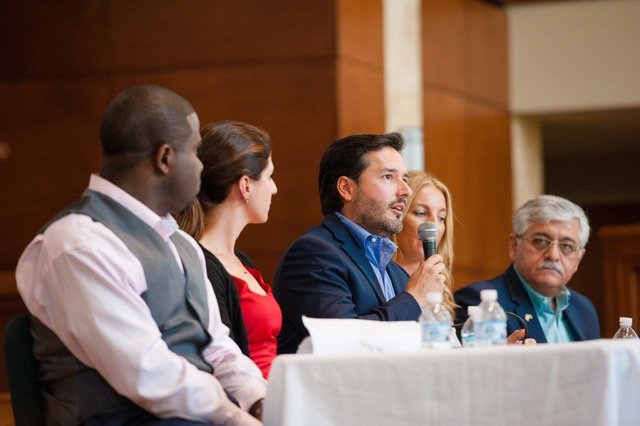 With its promise of freedom and potential for unparalleled opportunity, America has been shaped since its inception by immigrants who accept the challenge of building new lives here. Because of war, love, hope, or necessity, each person brings a desire for a better future and the courage to overcome obstacles. The story of each immigrant is different but the nature is the same. People come to America for opportunity. In many countries you are told what to do, your freedom is conditional, and the power to make decisions lies with someone else. At our TEDxJacksonville Salon “Hidden No More: The Immigrants Within Our Community,” our panelists shared their stories of hope, and in many cases, how the lives they left behind instilled the courage and willpower to live and succeed in America. Our panel included: The panel was moderated by TEDxJacksonville co-organizer and Executive Producer Sabeen Perwaiz Syed.

This reminder that kindness, curiosity, openness and acceptance are fundamental American values is an important message no matter what the current political or social landscape. In an inspiring discussion, our panelists shared stories of neighbors and teachers, of fear and courage, and of overcoming unimaginable struggles all in an effort to realize the American Dream. History has proven time and time again that it is unreasonable to blame social, financial, and political issues on the hardest working immigrants. Mario Decunto: In a commonly overlooked chapter of American History, roughly 1 million individuals were forced across the border into Mexico, called repatriation, which took place during the Depression in the 1930s. Many of these individuals, Mario’s grandmother included, were American citizens of Mexican descent forced to leave their homes, businesses, and communities due to attitudes brought on by the Depression and because Mexicans were the most recent immigrant group to move into the United States. Mario’s grandparents were forced from their home in California, across the border to Mexico, and were eventually able to make it back into the country where Mario’s grandfather became the first Mexican-born mayor of his city in California. As a mental health expert specializing in children and families, Mario is keenly aware of the challenges that face young immigrant children in Jacksonville and, more broadly, in the United States as a whole. Mario notes that the feelings of shame and embarrassment weigh heavily on a child’s academic performance. Many of us will never truly understand the struggles that the families of these children have experienced, and to feel different and afraid at school is a major hurdle to overcome. Dane Grey: Dane Grey is the president and CEO of Elite Parking Services of America; he started his company in 2007 as a student at Jacksonville University, after coming to the United States at the age of 11 from Jamaica. Both an example and an advocate of the American Dream, Dane has persevered through challenges and has proven that if you work hard you can do anything. Dane discussed the challenges of scaling up his company—learning how to be a CEO at a young age, expanding his company into new regions, and more recently, adding additional layers into the organizational structure. Building his company, Dane has found that leaders are learned. Mentors, coaches, friends, and family are incredible resources—sharing insight and direction when the path forward was unclear.

Arjola Miruku: Arjola’s family moved to Ponte Vedra from Albania when she was 12 years old; she knew no English and was enrolled at Landrum Middle School. The journey to learn English was a long one — hours and weeks of sitting in the school hallway with a book and a cassette player, listening and following along, learning the English language during school hours while reading and writing Albanian in the evenings so as not to forgot her native tongue and heritage. Arjola’s parents encouraged a dedication to both arts and academics; sacrificing one for the other was not an option. Arjola went on to learn English and earn all As that semester, to enroll in Douglas Anderson School of the Arts for piano during high school, and to become valedictorian her senior year. Arjola’s experiences inspired her to become an educator. She now owns her own company, Play Academy of the Arts, and teaches piano. On otherness and feeling different, Arjola discussed how novelty is so exciting when you are young–you don’t yet know bias, and everyone is on an even playing field. As we grow up, the walls come up and differences are magnified. Arjola discusses the importance of being an educator and the ability to use difficult experiences and interactions to drive discussions about diversity and differences. Mobeen H. Rathore, MD: Mobeen and his family were in the country for 17 years before 9/11; they were established in their communities, jobs, and schools. As expected 9/11 brought about a time of racially charged attitudes and actions—in this period of fear and a heightened sense of otherness, a neighbor’s friendly words were the comfort needed to push forward. Mobeen is a physician and is the Founding Director of the University of Florida Center for HIV/AIDS Research, Education, and Service (UF CARES) and Professor at the University of Florida College of Medicine. At the age of 23, Mobeen came to America and underwent the long transferring and credentialing process. Many immigrants that come to America as professionals have already trained in their home countries, and must take the time and effort to prove themselves at the same proficiency level as American physicians. Fuada Velic: In 1995, Bosnian Serb forces killed more than 8,000 Muslim men and boys during the Bosnian War. From ages 8 to 16, Fuada Vedic lived in her basement in Bosnia with no electricity and limited food. She lost her father and her grandfather. In 2000, Fuada and her mother came to the United States to Jacksonville with one plastic bag filled with everything that was not lost in the war. Fuada attended high school, while taking care of her mother and learning English. She reflected on the importance of her school, educators, first job, and managers in her continued success. In November 2016, 16 years after moving to America, Fuada was asked to represent Bosnia in the Paris Marathon. Fuada is an avid runner, and has been since her childhood, when she ran to divert her mind from the difficulties and struggles of the time. As we continue to examine the Jacksonville community in an effort to encourage inclusivity, we must not be afraid to hide our otherness. We must instead use our otherness as an opportunity to drive discussion. We must be aware of differences, be willing to listen, and refocus our political structure to one that is inclusive, diverse, and representative of the community. Our Salon reminded us of the strength that comes in being different. Let’s be different, together. ~ by Miya Kusumoto
Tags: Arjola Miruku, Dane Grey, Fuada Velic, Hidden No More, Immigrants, Mario Decunto, Mobeen Rathore, TEDx event, TEDx Jacksonville Salon, TEDxJacksonville
Share on Facebook Share on Twitter 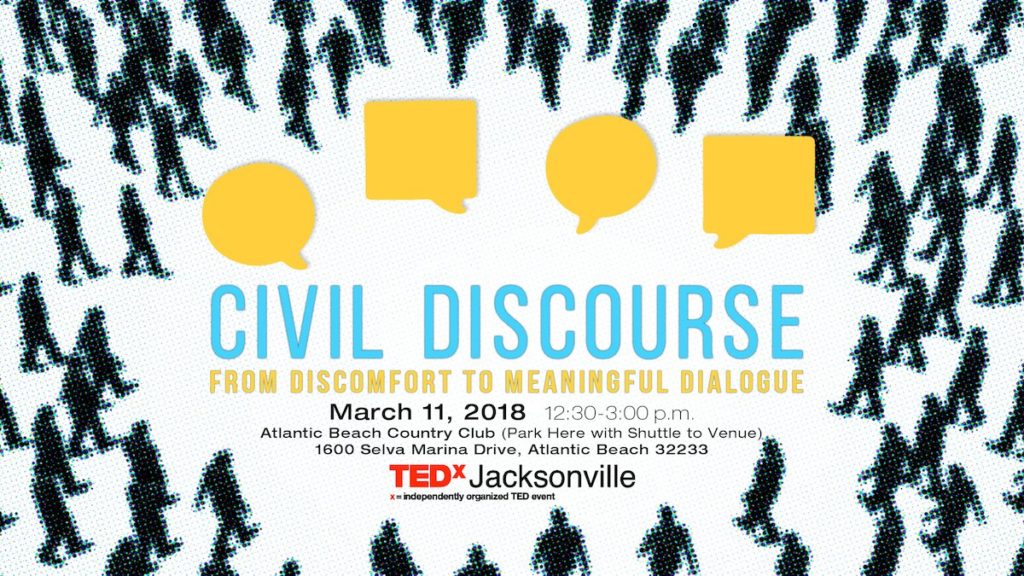